It is that time of the reading month again to showcase one of many books on my shelves that I don’t talk about, and haven’t got around to reading yet. They may be new books, those that have been published a while now, standalones, and even books in a series. Basically any book!

Today’s instalment is centred around The Relic Guild by Edward Cox. 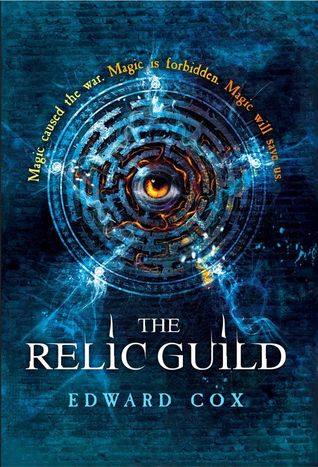 Magic caused the war. Magic is forbidden. Magic will save us.

It was said the Labyrinth had once been the great meeting place, a sprawling city at the heart of an endless maze where a million humans hosted the Houses of the Aelfir. The Aelfir who had brought trade and riches, and a future full of promise. But when the Thaumaturgists, overlords of human and Aelfir alike, went to war, everything was ruined and the Labyrinth became an abandoned forbidden zone, where humans were trapped behind boundary walls a hundred feet high.

Now the Aelfir are a distant memory and the Thaumaturgists have faded into myth. Young Clara struggles to survive in a dangerous and dysfunctional city, where eyes are keen, nights are long, and the use of magic is punishable by death. She hides in the shadows, fearful that someone will discover she is touched by magic. She knows her days are numbered. But when a strange man named Fabian Moor returns to the Labyrinth, Clara learns that magic serves a higher purpose and that some myths are much more deadly in the flesh.

The only people Clara can trust are the Relic Guild, a secret band of magickers sworn to protect the Labyrinth. But the Relic Guild are now too few. To truly defeat their old nemesis Moor, mightier help will be required. To save the Labyrinth – and the lives of one million humans – Clara and the Relic Guild must find a way to contact the worlds beyond their walls.

In the long game, defeat was only part of the strategy.

Alone and beaten, Fabian Moor strode across a narrow bridge of stone. Cold purpose drove each of his steps as his path arced over a chasm so deep that light itself was swallowed into an endless void. He looked up at the luminescent stalactites that hung from the ceiling of a vast cavern like the spires of an inverted cityscape, glowing with a violet radiance. With a surge of intolerance, Moor gritted his teeth as he glimpsed something moving among the shadows there. A silhouette, dark and sleek against the pale light, left the cover of a stalactite and sailed down towards him with a slow beating of huge wings.

I don’t know why I hadn’t heard of this book because it sounds rather good. I’m up for a fantasy/dystopia novel and I haven’t read one for a while, so it will be interesting to see if I still like them or not. Apart from the blurb, I don’t know anything about this book and I’ve not come across any chatter at all.

Maybe that’s for the best though.

Have you heard of this book?

Have you read it?