If there is one Alice in Wonderland inspired piece that I love the most out of Disney’s repertoire, it is the 1936 Mickey Mouse short film, Thru the Mirror. 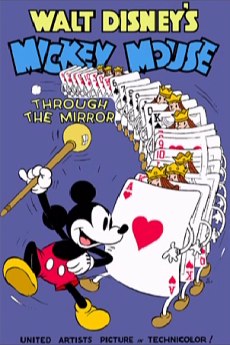 My best friend and I discovered it on her Alice in Wonderland dvd and whilst you might think that yeah, that’s obvious and we should have known, the short film wasn’t mentioned as a bonus feature on the dvd’s back cover. To us, it was a hidden gem and probably one of the best we could find!

Falling asleep whilst reading Alice Through the Looking Glass (something a lot of us readers have done quite a few times), he starts dreaming and finds himself in a topsy-turvy world where his house comes to life. It’s fun to start off with, but of course Mickey lands himself in a bit of bother and wants to escape the dream.

What I love about this short film is that it takes Alice Through the Looking Glass and translates parts of that story so that it fits with Mickey Mouse’s personality. Mickey is Alice but he is still himself at the same time. He remains cheeky, is likely to get into trouble (although I suppose that is a similarity between him and Alice), and shows us why he continues to be popular. I think one of my favourite moments in the entire film is Mickey dancing like Fred Astaire with the hat and cane. It’s a classic piece of film history and I’ve always been attracted to that era of Hollywood because there’s something timeless and unforgettable about it all. Besides, those films are now hugely underrated and in need of coming back out of their respective film vaults all the time, not just at Christmas!

Another moment I like is Mickey jumping onto the globe to find that it is just as anthropomorphic. Having him become trapped under the lines of latitude and longitude is a clever piece of animation and I wouldn’t mind just watching that section on repeat.

– The King of Hearts is a caricature of Charles Laughton’s Academy Award-Winning portrayal of King Henry VIII in the 1933 film The Private Life of Henry VIII.

– It is said that the footstool near the beginning of the film that acts like a dog may have inspired Sultan in Beauty and the Beast.

– The Queen of Hearts is a caricature of the famous film actress, Greta Garbo.

– The scene in which Mickey dances with the gloves can be seen in the Aladdin segment of the bubble montage in Walt Disney World’s Fantasmic!

That is that for this smaller segment of Alice’s Through the Decades.

Have you seen this short film?
What are your thoughts?