Carrying on the Bambi theme for November’s Through the Decades, I want to look at the film’s representation in and around the Disney properties.

From what I’ve seen, Bambi is one of those films that doesn’t get the attention it deserves from Disney, but thinking about it, it’s not one they can do much with outside of merchandise.

So what representation does it have?

In the Disney parks is probably where Bambi and a couple of the other characters from the film get the most representation.

In terms of night-time spectaculars, he can be/has been seen in:

Otherwise, Bambi is a popular character to be used for topiaries during park celebrations such as Swing into Spring (Disneyland Paris) and the International Flower and Garden Festival (EPCOT, Walt Disney World). 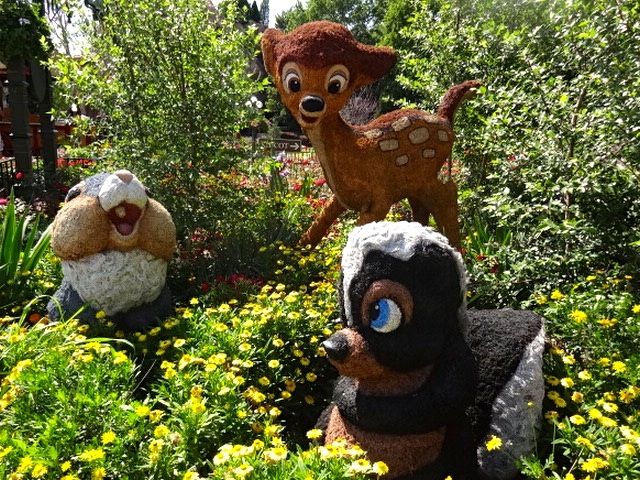 Also according to Character Central, Thumper has been seen as a walk around meet-and-greet character at Walt Disney World, Disneyland Paris and Tokyo Disneyland. I think he might be considered to be a rare character though and only out on special occasions.

Considering I said that Disney don’t seem to do much with Bambi, they use it enough for the characters to be recognised. I just wish there was another way that they could show off the film and remember how much of a classic it truly is.

Maybe it is time to get our own Imagineering hats on.

Does the film get the representation it deserves?
How do you think Disney could represent Bambi more?