Welcome back to Through the Decades, and this time it is Pinocchio’s turn to influence the posts for this coming month. When I sat down to plan all this I knew this film would contribute in a big way because it is one of those earlier classics that influenced mine and my sister’s love for Disney. It was the film my sister watched over and over again as a young child and we weren’t be able to get through a weekend family dinner without letting her go off to watch it when she’d had enough. I even recall her jumping crazily on my parents’ bed in sheer joy when she unwrapped a replacement vhs as the first had become damaged due to repeated viewings. Nowadays she won’t watch it as much as she says it makes her cry, but its childhood importance is still there.

If I sit down to watch it, I’m in awe of the film’s technical beauty and its dark story. Pinocchio and Jiminy Cricket look child-like and appealing, but that is in stark contrast to the film’s plot which is very dark and mature. None of the antagonists receive any consequences for their actions, yet when Pinocchio ends up at Pleasure Island his penalty for every action taken culminates in him turning into a donkey. It doesn’t balance out and suggests to me that despite having some good and honourable intentions, bad things will still happen. Walt Disney didn’t just produce the animated films for children but everybody and that is certainly proven by this well-loved and critically acclaimed story. 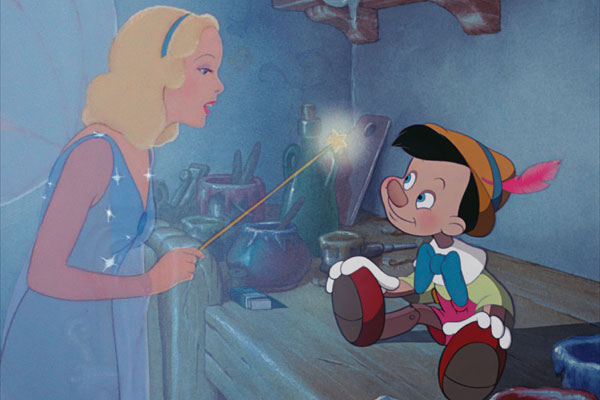 Regardless of its praise and the fact that it is described as the most technically perfect animated Disney film, it was initially a box office disaster. Cut off from the European and Asian audience as a result of the Second World War, it was unable to reach the same heights as Snow White and the Seven Dwarfs. The distributors, RKO, recorded a loss of $94,000 whilst Disney listed a total loss of nearly $1.5 million by 1947. Nonetheless, this wouldn’t last. Between 1945 and 1973, Pinocchio earned $13 million from the initial release and four reissues. Further releases have brought a gross box office profit of just under $84.3 million to the Disney, making it a huge hit. Even the Hollywood knew that it was a film worthy of praise, giving it both the prestigious Original Song and Score Oscars at its latest award ceremony.

And that legacy certainly lives on in Disney today. It plays a huge role in the theming of Fantasyland across the different parks, influencing attractions and restaurants. Many of the characters are also available for meet and greets and feature prominently in the various shows and parades.

That is also not forgetting to mention When You Wish Upon A Star, the biggest song from the film, inspiring both Wishes and Remember Dreams Come True firework spectaculars. And more importantly, it is Disney’s flagship song, played at the beginning of every film over the castle logo.

Snow White and the Seven Dwarfs might have been the first full-length animated feature film, but I’d argue that Pinocchio has the greater influence and legacy. Artistically and technically, it is the stronger film and it seems to be referenced more in other Disney films and productions.

Like I said at the top, it might not be one of my favourites but it is instilled in so many of my childhood memories that it is significantly important, especially in terms of the relationship between me and my sister. When she was becoming more interested in why I love Disney, she constantly asked me about her obsession with Pinocchio and why she watched it so much. I still can’t answer that because I honestly don’t know, but it is clearly that foundation from which she has developed a love of Disney and strengthened the sisterhood between us.

And so that is that.

I should hopefully be back with more Pinocchio-related posts soon!