I’m bringing you an impromptu Through The Decades post all about Goofy because today is his 85th birthday!

Back on this day in 1932, he first appeared on the screens in the short film Mickey’s Revue, directed by Wilfred Jackson. 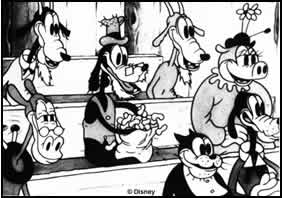 This short film begins like any other of the time but it differs due to the introduction of Goofy, or as he was commonly known back then, Dippy Dawg. He is watching Mickey, Minnie, Horace Horsecollar, and Clarabelle Cow perform a song and dance show, but as you can see from the image above, he is the annoying spectator in the crowd – constantly munching peanuts and laughing loudly.

During this time he was also an old man with a white beard, a puffy tail, and wore no trousers, shirts, or undergarments. The one thing that the short film did keep of Goofy’s character was his distinct laughter.

“Dippy Dawg” made a total of four appearances in 1932 and two more in 1933 but only as a minor character. By his seventh appearance in Orphan’s Benefit in August 1934, he became Goofy and a regular member of the gang alongside Donald Duck.

From this time until 1939, he was voiced by Pinto Colvig. Until Colvig came back to the studios near the end of the Second World War, he was voiced by George Johnson. From then on, Goofy has been voiced by a myriad of different actors. Only from 1987 onward has Bill Farmer provided the voice for regular appearances.

Since the 1941 short film The Art of Skiing, Goofy has become famous for his signature holler. It was first recorded by yodeller Hannes Schroll, and some people even claim that he wasn’t paid for the recording. Now it is done by the current voice actor, Bill Farmer. This holler can sometimes be heard in cartoons, films and attractions in which Goofy doesn’t appear.

Up to 1939, he usually featured in short films alongside Mickey and Donald. Only when Goofy and Wilbur was released, did he star on his own. When Pinto Colvig had a falling out with Walt Disney (I reckon something to do with the introduction of unions and the beginning events of the Animators’ Strike) and left the studio, he began to feature in the How To…cartoons in which he had little to no dialogue.

The format for these films are still used in Goofy shorts today!

Out of the Sensational Six, Goofy is one of the only characters next to Donald Duck to feature in full length animated films – Saludos Amigos, Fun and Fancy Free, A Goofy Movie and An Extremely Goofy Movie.

He has also made cameo appearances in Who Framed Roger Rabbit, The Little Mermaid, The Lion King 1/2 and Saving Mr Banks.

In addition, he is one of Disney’s most versatile of characters. Though usually a good guy, Goofy has played antagonistic roles in a number of cartoons including: “Ye Olden Days,” “Motor Mania” “Goofy’s Freeway Trouble” “Mickey’s Christmas Carol” (one of my personal favourites) and “Donald’s Halloween Scare.”

What I love about him compared to some of the main characters is that he is flawed. His blissful and optimistic nature can often blind him from the feelings of those around him, and he tends to involve them in his own mistakes – Max in particular. However he is selfless and always wants to lighten any mood.

What is his significance to Disney?

Thanks to his connection to Mickey Mouse and the rest of the gang, he is one of the most popular Disney characters. In and outside of the Disney parks, you will see him on lots of merchandise. And as a versatile character, Disney will always be able to use his character in a variety of ways.

He is currently the only member of the Sensational Six to have his own film.

Even though he has been paired with Clarabelle Cow and often dated a couple of women in the Goof Troop series, he doesn’t have a significant female counterpart.

And that is that!