Hello and welcome back to my series Disneyland Paris at 25. For anyone who wants to know more about it you can go here, but in honour of Disneyland Paris’ 25th anniversary, I am counting down (or discussing since I can never do countdowns properly) the 25 permanent things I love about the park.

Up to now we’ve had:

and this time I’m heading back onto Main Street USA to re-discover gems that are completely unique to Disneyland Paris… The Liberty and Discovery Arcades.

Imagineers were influenced by Tokyo Disneyland’s Main Street USA and their desire to protect guests from inclement weather. However by creating the walkways at both sides of Main Street, they allowed for the daily running of parades and the constant hustle and bustle of street life that was important to the Parisian and turn-of-the-century urban scene.

Both have contrasting themes and yet completely encompass the feel and atmosphere of Disneyland Paris, whilst adding extra depth and detail to the backstory.

Looking down Main Street USA from the Disneyland Hotel and the Main Street Station, the entrance to the Liberty Arcade can be found on the left-hand side, in between the Emporium and Minnie’s usual meet-and-greet location.

Its theme is the Statue of Liberty and it pays homage to the story that has bound both France and America since 1865/66. Three separate scenes detail the development and legacy of liberty, and how is brings enlightenment. 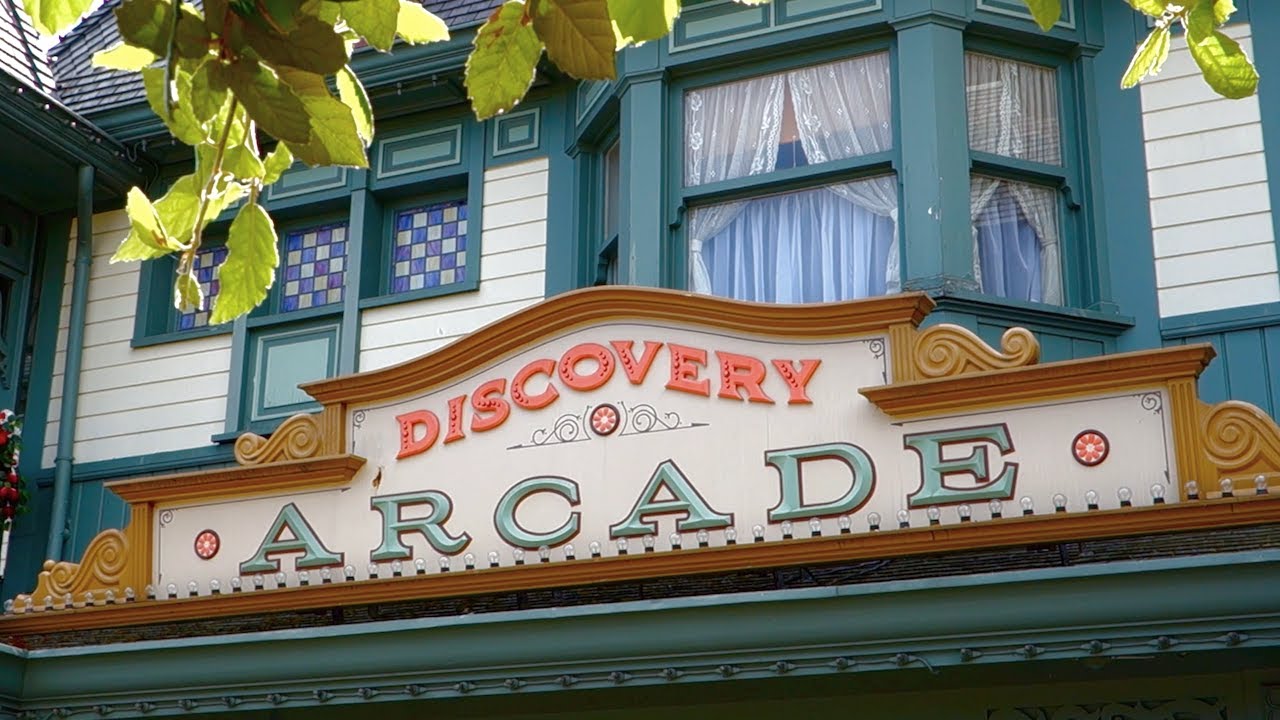 At the top of Main Street USA, the entrance to the Discovery Arcade can be found next to Flora’s Boutique. Themed to ‘discovery, industrialisation, and the Victorian vision of the future, it makes for a smooth transition from Main Street USA and the Central Hub into Discoveryland, keeping the details inspired from visionaries such as Jules Verne and Leonardo da Vinci.

Both lit with gas lamps, they are a perfect addition to Main Street USA, retaining the 19th Century gothic architecture and interior design.

What I particularly love about these arcades/protected walkways is this further expansion and depth to the history and backstory of Main Street USA, along with the injection of more European ideas and influences – you can be in Turn of the Century America and then easily walk into Paris without leaving that era behind.

Thematically speaking they are on par with Discoveryland and Fantasyland, understanding of the importance of European thinking and traditional tales to our modern culture.

To me they also enhance Walt Disney’s own futuristic and nostalgic ideas, whilst also indirectly honouring his French ancestry. He was also forever keen to promote Disneyland not just as a theme park but as a reflection of societies and cultures – a time capsule of history as well as entertainment. This, is my favourite thing about these arcades because similarly to Walt Disney I’m very much fascinated by social history and especially during the Victorian era where there was a vast amount of change. I can wander round the rest of the park and have fun on the attractions, meeting characters, watching the parades, and then when I want a quiet moment to myself I can immerse myself in the history that is so endemic to Disneyland and Walt Disney.

I’ve also found these areas of the park to be relatively quiet in comparison to the rest of Main Street USA. They’re perfect for those quick moments of respite, and easily accessible for anyone. In that respect they provide the best access out of the park, especially at busy times when there are difficulties getting through busy crowds.

Some of the small liberty statues found on display are those that were distributed at the inauguration of the Statue of Liberty.

It brings to life a concept designed in the 1950s for Disneyland – Liberty Street. Walt Disney hoped that this street would have inspired guests to fully appreciate the significance of their heritage and liberty throughout recreations of famous moments and landmarks which shaped modern America.

At the end, there is a “hidden” route to the left that leads along the Thunder Mesa Express path to Frontierland. It can be followed through Fort Comstock and around the paths to the Adventureland Bazaar, and then onto Pirates of the Caribbean and Peter Pan’s Flight. – a route designed to help guests reach the length of the park without being exposed to the elements.

The 52 inventions on display are actual proposed inventions from the late 1800s. Originally they came from The American Patent Office but as they didn’t have space for all of the inventions, US Congress insisted that they be sold, given away, or destroyed. These specific models in particular came from the collection of Alan Rothschild and besides Disneyland Paris, the only other place where anyone can view the collection is the Trademark Office in Alexandria, Virginia.

The posters depicting cities of the future actually date back to the late 1980s. They were all designed, drawn and painted exclusively for the park by Jim Michaelson, Maureen Johnston, and R.Ziscis in the style of 19th Century French artist Albert Robida.

A new display was added to the arcade in 2009, featuring a scale model of the original Ferris Wheel from the 1893 Chicago World’s Colombian Exhibition.

Thank you for reading this instalment of DLP at 25 and have a brazzle dazzle day!
xx

One thought on “DLP at 25: Liberty and Discovery Arcades”