Or as it is known to the non-French speakers….the Sleeping Beauty Castle.

Unlike the castles of Disneyland and Walt Disney World, Imagineers went out of their way to create a fanciful and fantastical castle that fit with the essence of Disneyland Paris and the European, traditional Walt Disney film-esque aspect of Fantasyland. They also didn’t want the castle blending in with the surrounding châteaux of the Loire Valley so in order to create what we see today, Imagineers looked at different castles and churches for inspiration.

Also wanting to understand what not to reproduce, many of the ideas were cherry picked:

However they also took it to the next level to make it uniquely Disney.

Perched on the top of a hill, surrounded by geometrically designed trees and a flowing moat, Le Château de la Belle au Bois Dormant truly looks as if it has jumped out of an animated fairytale.

And adding in a concealed dragon’s lair down below (La Tanière du Dragon), plus the Sleeping Beauty gallery, the castle truly is the star attraction for Fantasyland and the ultimate icon for Disneyland Paris itself.

If you walk down Main Street USA and take a slight left when you reach the castle, you might just find an entrance way to an underground lair. This attraction specific to Disneyland Paris holds a rather testy and temperamental dragon, that some might say is Maleficent – that is if the sign (pictured above) is anything to go by. 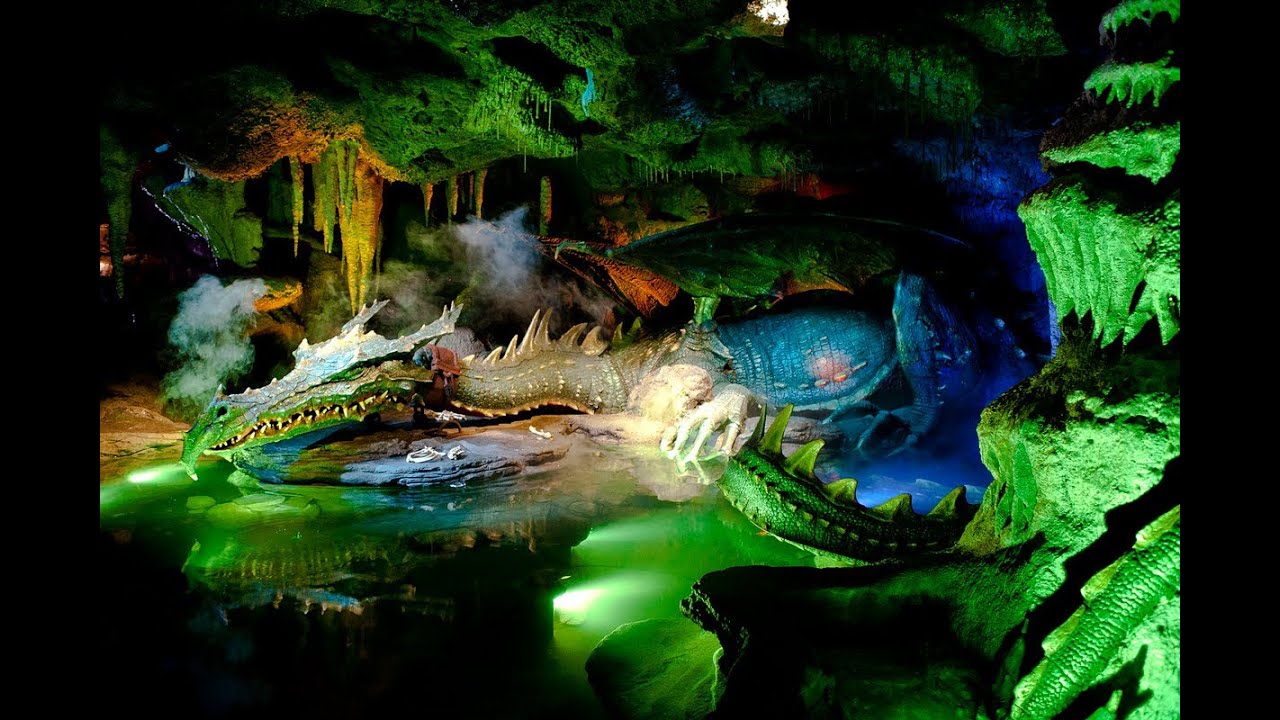 This impressive animatronic is the biggest at Disneyland Paris, measuring at 79 feet long and weighing around 5,500 lbs.

Often seen snorting smoke, it is both a little terrifying and fantastic to watch. I don’t often go down into the lair but the spine-tingling sensations I get watching this dragon are very similar to what I experience when watching Maleficent turn into her dragon form in Sleeping Beauty. Granted I was terrified of that scene when I was little and this used to creep me out a bit too but I think that is a testament to the Imagineers for creating such a life-like animatronic. The theming is also fantastic and it really feels like your down in a dark, wet, gloomy dungeon of any a French château.

Through a “secret” door, you come out into one of two shops situated inside the castle – Merlin l’Enchanteur.

This small shop is dedicated to selling jewellery, glass ornaments, and more speciality objects. It is also where you can find a crystal replica of the castle, selling at a fixed price in the five-figure range.

The detailing however is fantastic because if you look closely at the stonework, it is as if things seem to be falling apart of their own accord. For example, Merlin has used a tree to prop up one of the arches and near the passageway to La Taniere du Dragon, some of the freestones appear to be split.

Opposite this store is La Boutique du Château, a more refined and classic styled store, inspired by the Sainte Chapelle (a Paris church with elegant vaulted ceilings, rich colours and ornate stained glass)

Again it’s not a store I usually go into but I can’t deny that it is beautiful and completely within the French, medieval theming of Sleeping Beauty, regardless of it retaining the Christmas spirit all year round. And it is in keeping with Disney’s Sleeping Beauty – housing a decorated fireplace inspired by the forest scene where Aurora meets her woodland friends and starts waltzing to Once Upon A Dream.

Out of everything that is inside and outside of this castle, the gallery is probably my favourite part.

Going past this ornate storybook and up some typical spiralling French stairs, you enter into the story of Sleeping Beauty and see it play out in front of your eyes.

This is done spectacularly through 9 Aubusson tapestries and stunning stained glass windows.

Woven through the tapestries, you can also hear the music from Tchaikovsky’s ballet. I’m going to end up using the same superlatives repeatedly but all the details that have gone into this gallery are brilliant and they seamlessly bring the Disney and traditional French feel of this story together.

I don’t want to single anything out but my most favourite detail is the round stained glass window that faces into the castle’s main hall. It contains two important thematic symbols from the film – a rose to signify Aurora’s gift of beauty, and two doves to represent the gift of song, both gifted to her by the fairies at her christening. With some fairy magic the rose turns into the doves and back again. Although in truth it is created by an optical effect which uses polarised light to change the image – but let’s just ignore that and in the spirit of Disney say it is really fairy magic at work!

What else makes this castle fabulous is that it truly is the perfect backdrop for any of the nighttime spectaculars that Disneyland Paris have done over the years. I first went to DLP in 2005 and it was when they were showcasing Wishes (still one of my favourite Disney firework shows). At the time, they had a Wishes logo in front of the castle at Central Plaza (containing the projection technology) and I thought that it was great. Whilst not particularly in keeping with the pink and blue of the castle, it was eye-catching and something nice to look at.

Speaking personally I much preferred it to the stage that was built there for the 15th Anniversary celebrations and that didn’t come down until the 20th anniversary.

However it doesn’t matter how much I gush about the castle because you can only truly understand its beauty and magnificence unless you’re actually stood in front of it, whether that’s from Main Street USA or Fantasyland.

When the towers were installed, Imagineers realised that the colour was wrong. Ron Espsito, one of the men in charge of design, painting etc had to go up and spend two months repainting the castle. He recollected how cold it was in December and January that the paint didn’t stick and that it landed on the sides as if it were snow.

The tallest of the towers weighs 15 tons and measures at 55 feet tall.

Small Mickey heads are formed within some of the roof tiles

The Disney family coat of arms (featuring three lions) can be found above the side entrance to Fantasyland.

The pink and blue colouring of the castle symbolises the changing colour of Aurora’s dress. It also helps the castle to stand out against a grey sky.

The castle, like other Disney castles, faces north so that it is always in the best position to be photographed (there is never any back light)